Space and Sound: The effects of live and pre-recorded music on dance 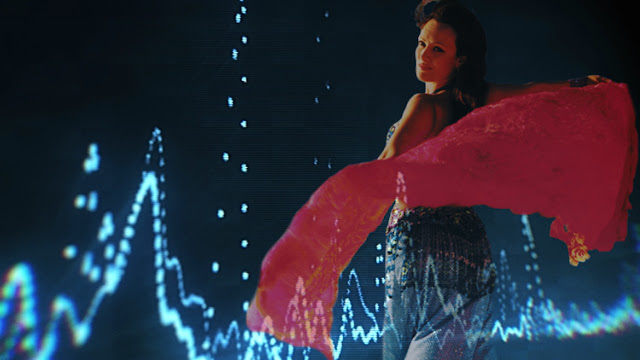 Many dancers, musicians and performing artists have tried their hand at digitally editing performance footage at some time, perhaps from live gigs or for promotional clips. I've been editing for many years, and have several sound engineers in the family who digitally master music. We've found these waveforms to be quite revealing, highlighting nuances that are sometimes difficult to pick up by listening alone. To observe audio as digital waveforms is always fascinating, as they show the 'structural form' of sound.

In recent years, whilst editing dance performance clips, some interesting patterns and differences between live music and pre-recorded waveforms have emerged, that have spiked my curiosity. The main difference is the syncopation of sound with visual performance footage that to live music, compared to choreographed work to pre-recorded cd tracks.

In 1998, when I filmed and edited "Bellydance Live" in Cairo, with an Egyptian band, where we demonstrated music-movement relationships, some of these differences became apparent. I was explaining connections between instruments and their naturally corresponding dance movements, and also filmed several Egyptian dancers at their shows, performing with live music. Simultaneously, I was editing footage for another project featuring several professional dancers, and their various stage choreographies performed to cd tracks. During the edit process, the music-movement patterns made sense, depicted clearly through waveforms. Even though it was represented within a somewhat abstract format, the audio and visuals were shown as two separate digital forms, visuals stacked over audio for easy comparison and clean editing. However, the edit process also revealed a unique quality of movement generated from the live musical experience, compared to dancing to pre-recorded tracks.

For the "Bellydance Live" video, I filmed some of Cairo's well known bellydancers, like Lucy at the Pyramisa, dancing with her orchestra, along with other baladi style dancers like Doaa, Neni and Hendeya. Not only were these dancers very in tune with their live music, but there was a pattern emerging in the edit files. Every time the audio waveforms reflected a distinct pattern, the feet, weight and accents synched with a transition that followed it - either just on the tail-end of the beat or lagging for a few milliseconds or more. Visually, a millisecond is usually three frames. The earth beat was almost always expressed by a connection to gravity in various points in the body. The musical bass beats and body's gravity points synched up, characterised by a very small delay. Yet, with the dancing performed to cd tracks, there was no delay, and in some cases, the movement came before the beat, as if it was leading the beat - which was very interesting.

In both cases, the rhythm waveforms reflected a consistent matrix, and the dancers found ways to respond within the invisible structure with their own feel. The dancer's gravity points remained fairly similar in look and feel, but when dancing to live music, the movements were either just on the beat or a fraction behind - indicating responsive movement. To the observer they appeared more relaxed, and more about the dancer's interaction with the music.

Compared to footage of dancers performing to cd music, especially pre-choreographed works, there was a distinct difference in the timing and syncopation of sound with movement from live recordings; dancing to live music allowed a more relaxed syncopation with sound, and the music led the movement, whereas pre-recorded, and particularly heavily mastered tracks, saw very little gap, and in some cases the movement was initiated before the sound. In the live music recording edits, there was distinct space between the audio and the visuals, whereas choreographed pieces tended to not only lack space, but the movement often appeared before the audio. I am guessing this is because of the 'known' factor, the preparation is more pre-meditated and anticipated.

In both live and recorded track performances, the higher frequency instruments affected the energies and movement higher in the body, the bass frequencies lower in the body, and when several instruments co-join within the same note range, the dancer usually turns. I conducted a worldwide survey a few years back which showed very similar results, suggesting a range of naturally occurring movement responses.

In LMA (Laban Movement Analysis) terms, in my edits over the years, I have noticed that bellydance movements to live music, when responding to bass beats and gravity points, usually manifest with 'pressing', 'wringing', 'slashing' or 'punching' qualities - the four 'strong' or weight-sensing movements from Laban's Eight Efforts. Responses to melodic sounds and spaces between beats usually elicit off-gravity movement, such as 'floating', 'dabbing', 'gliding' or 'flicking' movements - which are the four light movement qualities from Laban's Eight Efforts. With live music, movements with both light and strong qualities seem to occur with a sense of more space and often less movement occupies the sound. In the live music scenario, the dancer's body will often unconsciously turn toward the instrument, particularly in taqsim - almost as if the whole body is actively listening and judging where in space the sound is emanating. In contrast, pre-choreographed dances have a tighter sense of space and more control of destination, which are often intrinsic, if not essential to stagecraft and group performances.

In recent years, I'm noticing the patterns within the spatial structure of various maqamat (Arabic musical scales) and how they relate to dance movement creation. Each maqamat creates a feel through it's unique matrix, and the dancer's body fills this form and acknowledges its space; the higher frequencies elicit movements from the levity centre, the lower frequencies and bass beats create the weight shifts from the centre of gravity. Music always informs the dance. However, only in the live scenario, does the dancer also inform the music.

If you have danced to both live and recorded music, are there any differences you feel within your own dancing?

Musical exploration is a part of the new A-Z Bellydance;  finding creative ways of making personal and meaningful movement through the layers within the music. The new courses include live Egyptian music and rhythms. www.ketisharif.com

The Art of Mixing: A visual Guide to Recording, Engineering, and Production by David Gibson is a great book to read if you are interested in how sound appears as form in the digital space.

Popular posts from this blog

10 Things Bellydancers Can Enjoy in Lockdown 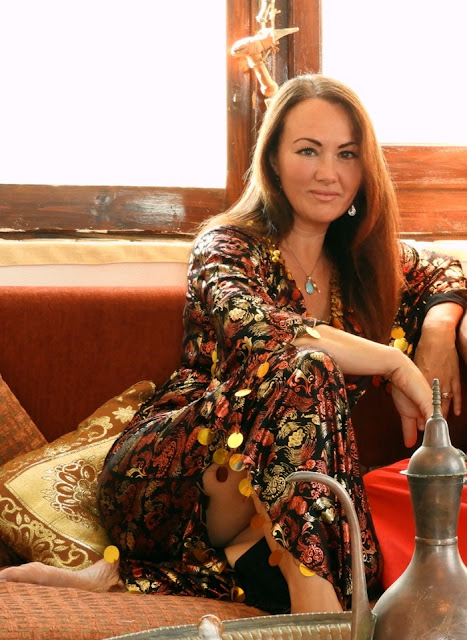 Dear Bellydancers in covid-19 lockdown, here are 10 things you can do that can be fun and productive!


1. GET MUSICAL:
Sort Out Your Music Playlists
Group your lists into various playlists - these could be grouped as: rhythms, orchestral compositions, taqsim, drum solos, folkloric music, pop, and a variety of cultural or regional styles & genres. And then make some teaching, performance or simply favourites or easy listening lists.

2. GLAMOURIZE YOUR COSTUME WARDROBE:
Organise, Mend or Update Costumes
Organise all your costumes and accessories, plus the fabric and decorations you’ve been collecting for years! Mend any costumes that need fixing and consider making some updates to existing costumes or hip scarves.
3. BUILD A VIDEO WATCH-LIST:
Keep a Video File of Great Bellydance Videos
Simply copy and paste youtube or vimeo urls into a word document, with a bit of info about your favourite dancers and their clips. If you sort these into groups, you’ll have a great reference for all your f…
Read more

Why Returning to the Basics is Essential to Your Dance Practice 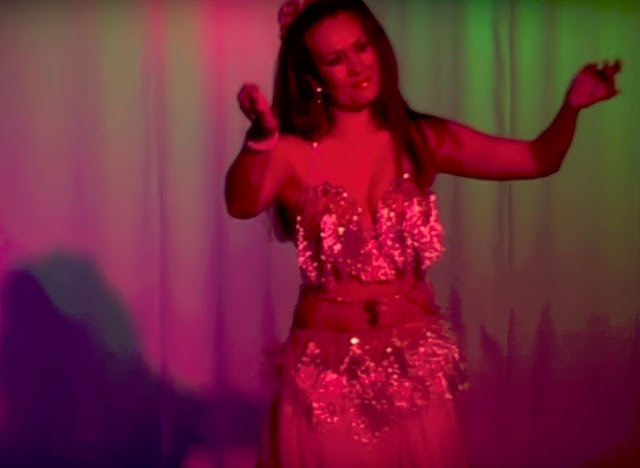 Bellydance is getting more complex. In just a few short decades, the artistic expression of an art with age-old cultural roots and ethos, has changed dramatically, reflecting the rapidly moving undercurrents of our new world. Movements are faster, choreographies are tighter and there seems to be an unspoken pressure on dancers to meet a certain criteria - one that would leave some of the world’s most famous Golden Era bellydancers lacking in the technical arena. Yes, times have changed and although the dance has evolved and branched out into new theatrical realms, bellydancers around the world have been expressing concerns about a pervasive sense of dissatisfaction, resulting in the type of frustration and internal conflict that can gradually erode one’s sense of artistic worth and self esteem.

We know that bellydance is not an exacting art, and that traditionally, enjoyment, sensuality and self-expression were at its core. So how do you, as a dancer, maintain your artistic integrity …
Read more

Keti Sharif
Hi I'm Keti, author of Bellydance (Allen & Unwin) and share his blog for my bellydance friends and community!